Britain is a country where old men remember their teens, the 'Swinging 60's' in London and a film called 'Blow Up' by Antonioni. 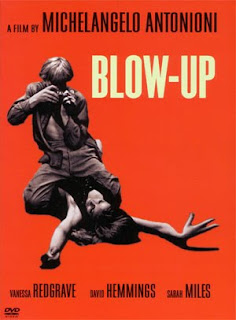 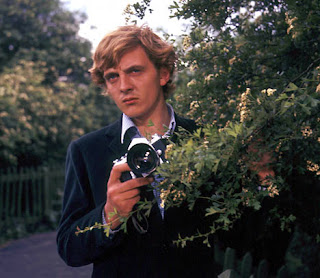 The Italian director Michelangelo Antonioni died in 2007 at the age of 94 on the same day as the 89 year old Sweidish Director, Ingmar Bergman.

In a career spanning six decades, he is mainly rembered for his Oscar-nominated 'Blowup' in 1966.

The film starred David Hemminings and was set in 'Swinging 60's London'. I lived as a 19 year old in the family home in South London at time.

* inspired by a Julio Cortázar's 1959 short story, 'Las babas del diablo' - 'The Devil's Drool' and by the life of London photographer David Bailey.

* nominated for several awards at the Cannes Film Festival and won the 'Grand Prix'.

A day in the life of 'Thomas', a fashion photographer who :

* spends the night at a doss house where he has taken photos a for book of art photos.
http://www.youtube.com/watch?v=gajciDcFfX8

* is late for a photo shoot with 'Veruschka' at his studio.
http://www.youtube.com/watch?v=wygqlfUoJEs

* is late for a shoot with other models later in the morning.

* grows bored and walks off, leaving models and production staff in the lurch.

* finds the woman (Vanessa Redgrave) is furious at being photographed and is startled when she stalks him back to his studio and asks for the film. He hands her another roll instead.

* 'blows up' negatives of the film which seem to show a body in the grass and the killer lurking in the trees with a gun.
http://www.youtube.com/watch?v=PGP7VW_Obds&NR=1

* has a visit from the two girls again has a romp with them in his studio and goes back to the park and finds a body.
http://www.youtube.com/watch?v=B1kbdX-BFNY

* returns to his studio to find that all the negatives and prints are gone except for one very grainy blowup showing the body.

* at a drug-drenched party in a house on the Thames, can't put across what he has photographed.
http://www.youtube.com/watch?v=22AK98m-ju4

* waking up in the house at sunrise, goes back to the park alone to find that the body has gone.
http://www.youtube.com/watch?v=7wSvXuSE8Gg

* watches a mimed tennis match, is drawn into it, picks up the imaginary ball and throws it back to the players.
http://www.youtube.com/watch?v=r9u78vNOvvQ&feature=related

Interesting points about the film :

* 'The Yardbirds' perform 'Stroll On' with Keith Relf singing and Jimmy Page and Jeff Beck playing to either side, along with Chris Dreja.
http://www.youtube.com/watch?v=_zeza1xeWKM&feature=related

* Michael Palin of Monty Python can be seen briefly in the nightclub crowd and Janet Street-Porter dances in stripy Carnaby Street trousers.

* A poster on the club's door bears a drawing of a tombstone with the epitaph, 'Here lies Bob Dylan Passed Away Royal Albert Hall 27 May 1966 R.I.P', harking to Dylan's switch to electric instruments at this time.

P.S. The park scenes were shot in Maryon Park, Charlton, south-east London and close to the school I went to, till the age of 11.