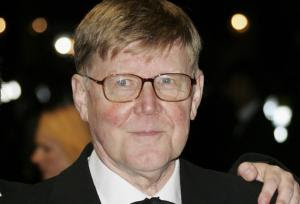 Alan Bennett, playwright, screenwriter and author is 76 years old and in June this year was robbed by 2 women pickpockets who stole £1,500 from him as he shopped in his local 'Marks & Spencer' store. They followed him there, splattered his raincoat with ice cream and then stole his wallet as they pretended to wipe the coat clean. A member of staff at the store said : “He wasn't hurt, but... was pretty annoyed about it all. It's an appalling state of affairs when an old man can't go shopping without being robbed.”

To me Alan Bennett represents the quintessential old-fashioned 'northern' Brit.

Here he talks to Melvyn Bragg about 'The Geography of Linguistics' :
http://www.youtube.com/watch?v=CupWZGZ9D6g&feature=related

* was born in Leeds, the son of a Co-op butcher and attended Oxford University where he studied history, performed with 'The Oxford Revue' and stayed to teach and research medieval history.

* collaborated as writer and performer with Dudley Moore, Jonathan Miller and Peter Cook in the satirical revue 'Beyond the Fringe' at the 1960 Edinburgh Festival.

* gave up academia, and turned to writing full time, for the stage : 'Forty Years On' in 1968; for film : 'The Madness of King George'; for tv : the monologues 'Talking Heads' and the play 'The History Boys'. Then followed popular audio books with his readings of 'Alice's Adventures in Wonderland' and 'Winnie-the-Pooh'.

Here he is talking about T.E.Lawrence :
http://www.youtube.com/watch?v=eDp4ghN_rVQ

The film trailor for 'The Madness of King George' in 1994 :
http://www.youtube.com/watch?v=gCVHxguFzWQ