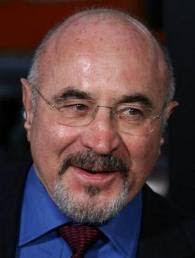 Things you probably did know about Bob, that he :

* is known for playing 'Cockney' rough diamonds, psychopaths and gangsters.

Things you possibly didn't know, that he :

* was born in Suffolk, the son of mother who was cook and nursery-school teacher and father who was a bookkeeper and lorry driver.

* had a grandmother who was a Romani.

* was brought up as an atheist by his father who was a Communist.

* at the age of 25 spent a short time in kibbutz in Israel.

* had his first tv role was in 'On the Move' in 1978, an educational series tackling adult illiteracy and in which he played 'removal man Alf', who had problems reading and writing.

* came to wider attention as a sheet music salesman in the BBC's adaption of Dennis Potter's 'Pennies from Heaven'
http://www.youtube.com/watch?v=i_PBpM4nnyM
* played Iago in Jonathan Miller's BBC's production of Othello.

* for his performance in 'Mona Lisa' won a series of awards.

* made his first appearance to American audiences in 'Who Framed Roger Rabbit', for which he received a second Golden Globe nomination.

* made a return to British tv in 2009 in the drama serial 'The Street', playing a publican who stands up to a local gangster.

Talks about his career :
http://www.spike.com/video/interview-with-bob/2767645