Britain is a country where old men remember the pretty, young Margaret Thatcher and discover that she also had human weaknesses 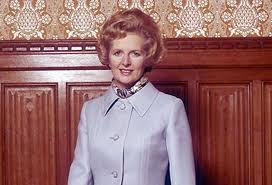 Mrs Thatcher who is 85 years old next week was once a very pretty aspiring politician.
Simon Hoggart, a political journalist who writes in 'The Guardian', has some very amusing stories about her. I am quite prepared to admit that, although I didn't share her political views, she was with Lloyd George and Winston Churchill, the third in the trio of greatest Prime Ministers of the last century. Simon's anecdotes about come as a pleasant surprise and I see her in a new light and as someone who was both human and unworldly at the same time. See what you think.
He makes the following points, that she :

* like many people, held in the grip of their own convictions, had trouble understanding the thoughts and words of others.

* could be tolerant of other people's way of living, even when she did not understand or sympathise with it

* when the Liberals adopted a stylised yellow bird as their logo and one of her speech writers produced a passage based on 'Monty Python's' parrot sketch with the lines : "this parrot is no more, it has shuffled off this mortal coil and gone to join the choir invisible ", had to be persuaded that the lines were funny, and would be recognised by the audience.
http://www.dailymotion.com/video/xoh8j_monty-python-dead-parrot-sketch_family

* when Peter Jay, the son-in-law of the then Prime Minister Jim Callaghan, had said that Callaghan saw himself as 'Moses', leading his people after long travails into the 'Promised Land' and her writers wrote a line for her party conference speech:

* was the source of much 'unwitting' humour and on being asked in the Commons about pacifists handing out leaflets outside an army barracks said to outright laughter from the Labour side and surreptitious giggles from the Tories :
"I'm sure soldiers will know exactly what they can do with those leaflets!"

* when at a training centre in Putney and introduced to an extremely large youth who was working with a giant wrench, said : "Goodness," I've never seen a tool as big as that!"

* saved the best of all for her victory tour of the Falkland Islands where, when taken to inspect a large field gun and asked if she would like to fire a round, said :
"But mightn't it jerk me off?" and apparently the soldier struggled manfully to keep his face, indeed his whole body, straight.

* when at a weekend summer barbecue at Balmoral with the Queen, insisted on doing the 'washing up' which was traditionally done on this occasion by the Queen and when she was overruled by the Queen, did not realise she was proposing to deprive her monarch of one rare and valued contact with the real world, as lived by her subjects.