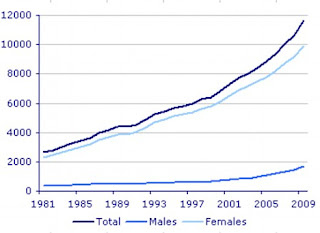 The graph shows the number of centenarians in Britain and the old boys are far out numbered by the old girls.

An article appeared in 'The Daily Mail' today was entitled :

The booming 100 club: Improved lifestyles lead to a four-fold increase in centenarians in 30 years

* the number of centenarians in Britain is booming thanks to our ever-increasing lifespans.

* even over the past two years the ranks of centenarians have swelled by nearly 25%, as people live longer lives.

* when the current generation of centenarians were born in the years before the First World War, only 100 people in the whole of Britain were thought to have reached their century.

* life expectancy has been transformed by better medicine, decent housing and central heating, the availability of plentiful, cheap and good quality food, the decline of jobs requiring heavy and risky manual work and their replacement for millions by comfortable office jobs.

P.S. At 111 Elsie Steele is the oldest person in Britain today. 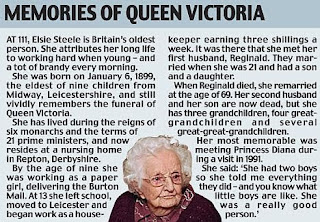