Britain, once a country where boys asked for " a penny for the guy ?", is now one where teenage youths threaten " trick or treat?" on doorsteps. 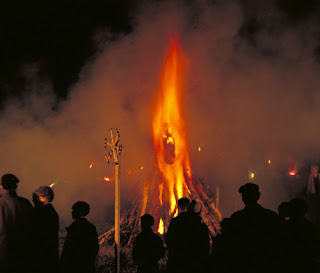 When I was a boy, like all baby boomers, there was 'Guy Fawkes' or 'Bonfire Night' on the November 5th.I've always assumed the fires harked back to the Catholic plotters, who had been found guilty of plotting to destroy the King and both Houses of Parliament, with a gunpowder explosion, in 1605.
http://www.rocketboom.com/bonfire-night/

When I was a boy, kids on the streets would prop up their stuffed 'guy', derived from 'Guido' Fawkes who was one of the plotters, on the streets and 'ask' for "a penny for the guy ?". 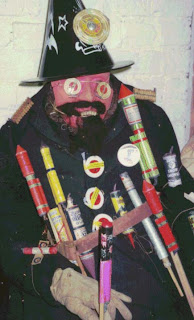 Quite quickly, in the last few years, Bonfire Night's place in the annual 'celebratory calender' seems to have been replaced by Halloween Night.
As the night of Sunday October 31, 2010 approaches, Britain's old men prepare to bolt their doors against teenagers demanding 'money' or a 'treat' and repaying refusal with eggs and flour thrown against doors and windows.

A couple of years ago, we didn't answer the door and had a brick thrown against the window, which fortunately bounced of the supporting strut. The year before that, the eggs thrown against the wall stuck like concrete on the rendering and could only be removed the next day with a power hose. 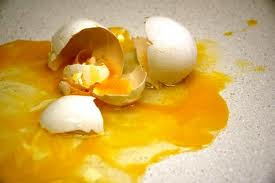 To me this 'fun celebration' seems to have made its way in from the U.S.A. and supermarkets are selling costumes and other paraphernalia connected with it. 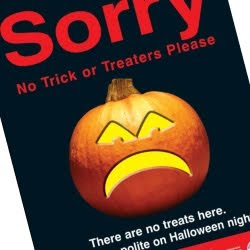 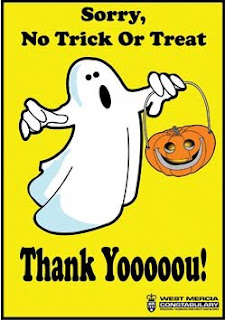 Some police forces offer fliers to be put on doors by members of the public who do noy want a visit from halloweeners. My reaction is that these would act as a 'red rag to a bull', inflame young tempers and invite a barrage of eggs and flour.

There is 'usefulful' advice available :

* 'The simple way of dealing with trick or treaters is to just give them what they want. The premise is that, if you don’t give them treats then they’re allowed to perform a trick, such as pelting rotten eggs at your house, so to save any bother, just give them some sweets and be done with it'.

* 'If you don't want to give them anything, or don’t trust them, then the next best option is to pretend you’re not in. Decamp to the back of the house for the evening, switching off all the lights and closing all the curtains at the front. If the tricksters know you’re in and think that you are deliberately ignoring them then they may be tempted to enact some kind of revenge'.

There is even advice to the trick or treaters themselves :

• Do not knock on the doors of strangers - only go to people you know.
• Always keep to well-lit areas. Wear bright clothing and always carry a torch.
• Unless pre-arranged, do not visit elderly members of the community. Be careful not to frighten vulnerable people.
• Keep your tricks within the law - anything that results in damage is an offence and will be dealt with as such.
* Do not approach houses with the ‘No Trick or Treating’ signs. They are there for a reason.
* Remember, calls, tricks or pranks may be harmless fun to some people but can cause real distress to others. Behaviour such as throwing eggs or flour can also quickly cross the line from being anti-social into causing criminal damage.